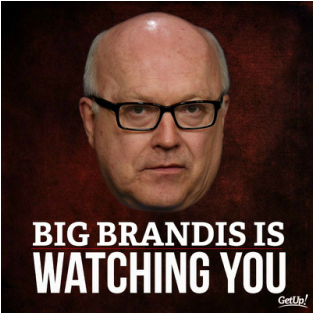 According to GetUp Australia:

Big Brandis is watching you.

Last night, the controversial data retention laws passed the Senate: 43 to 16. The laws granted government agencies access, without a warrant, to the phone and internet records of 23 million Australians. The data will be retained for two years.

"Aside from the obvious privacy concerns, the laws have serious implications for potential whistleblowers, who will now be far more reluctant to come forward with information that could expose misconduct within government."

The scheme, which was recklessly rushed through Parliament, is costly, ineffective, and against the public interest.


The flawed legislation leaves open numerous loopholes, which can be used to evade the data retention. This means the data retention dragnet will capture the data of innocent Australians and cost millions of dollars, while allowing those who don't want to be caught to remain hidden.

The following can be used to circumvent data retention. None of these should be relied on for anonymity.

Now if you really want to get serious, here are some tools for the die-hard data retention evader*:

*These are all perfectly legal and anyone can use them.

Is there any evidence to suggest a mandatory data retention will prevent crime?

NOT mentioned in the GetUp article is FLAGGER, a browser add-on that adds words to the web address (URL) of the internet sites you are visiting. The added words are presumed to be 'interesting' to the software that the government uses to hone in on which meta-data to pay the most attention to. Get Flagger here.